The Triumph of Trump & the Dawn of a Dark Age 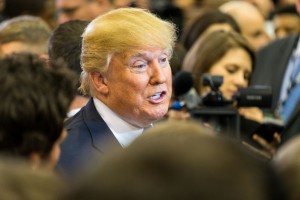 THE election of Donald Trump to the Presidency of the USA and the decision by the UK to exit the European Union are, I believe, consequences of where we are on the evolutionary journey, mere manifestations of the fear that drives our behaviour.

In many ways the election of Trump was inevitable — it represents our reactionary, regressive, conservative zeitgeist; the end of progress and the death-knell of tolerance, generosity, fairness and egalitarianism. What’s more, Trump embodies the jettisoning of science and reason for superstition and myth.

Trump’s victory is the manifestation of a world that has become aggressively uber-competitive; a world that does not understand that inequality is not only a justice issue, it is simply unsustainable. But instead of engaging in a rational dialogue about this, we ostracise and marginalise anyone who offers an alternative to today’s consumer-obsessed modus operandi.

That we have completely abandoned the wisdom of Aristotle and the ancient teachers is undeniable, but we have also dismissed the rigour of today’s psychological research that tells us that wellbeing and fulfilment are not to be found in the attainment of more and more material wealth. Instead, wellbeing is cultivated via engagement in something that is meaningful, in activity that uses one’s strengths and in devoting oneself to something greater than the individual, something outside of oneself.

To do otherwise is to be trapped on the hedonic treadmill, a psychological dilemma where people hunger for more and more pleasure only to feel let down and dissatisfied; to experience ever diminishing returns from their spoils, where our true needs remain unmet.

Like the Dark Ages, today torture is legitimised in the name of security, superstition has a revered place in our thinking, religious fundamentalism is omnipresent, the cult of celebrity is indulged and we are myopic and intolerant of difference, as if diversity were synonymous with danger. These are all hallmarks of life today, along with, of course, the lack of ideas, of progress. What’s more, we have the return of violence as a spectator sport, as entertainment. The mainstreaming and celebration of violence, like cage fighting, marks an obvious regression and points to the de-evolution of the species.

More and more, I find myself thinking about the Seven Deadly Sins and the realisation that they have now been perverted into virtues. Every day, I see a vice transmogrified into a virtue: avarice and greed, lust and wanting, wrath and rage, and, of course, pride which was regarded as the Devil’s most prominent state or as CS Lewis wrote, the anti-God state that leads to all other sins. Even sloth, that was more accurately about ‘not caring’, seems to be celebrated in oft heard refrain of ‘can’t be bothered’ and the general malaise of apathy that permeates our societies.

Trump won by causing discord and division and hatred and, to quote scripture, ‘He soweth discord among brethren’. For many, the sins are now something we aspire to and any abhorrent human behaviour seems to be legitimised as long as it makes money.

Abraham Lincoln appealed to our better angels but Trump appeals to our worst demons. It is so patently clear that now, perhaps more than any other time, we are simply not a good expression of what it means to be human, and Trump’s victory is simply the manifestation of this.

Perhaps the overriding feeling in a Dark Age is fear. Certainly this is the case today – fear of everything – missing out, different people, death, being poor, not being good enough, a lack of Facebook friends, people not liking us, not having a big enough house, not getting promoted, and so on, and so on.

Where is the unbridled optimism and hope of 1968 as we raced towards the Moon, righted the wrongs of racial injustice, marched along the long road to redress the balance between men and women and questioned the gulf between economic privilege and life-sapping poverty? Where is that sense that anything is possible, the feeling that we are on the cusp of greatness as a species.

Every day I think of the German philosopher and political theorist Herbert Marcuse who warned that technology would imprison people in unoriginal lives, devoid of creative thinking and anesthetised into a complacency that would be mistaken for happiness.

Perhaps the last words on Trump’s victory should go to two legitimate US statesmen.

Firstly, Bobby Kennedy, who questioned our preoccupation with economic growth when he said, “We will find neither national purpose nor personal satisfaction in a mere continuation of economic progress, in an endless amassing of worldly goods.” As if a harbinger of Trump’s rhetoric, Kennedy said, “The Gross National Product measures neither the intelligence of our public debate … or our compassion.”

Again, as almost a portent of what Trump would say about immigration, isolationism and fear, Franklin said, “Any society that would give up a little liberty to gain a little security will deserve neither and lose both.”

Read the Published Original Here; or please  SHARE YOUR THOUGHTS below